Ferrari has chosen Famek as its supplier of a newly developed vehicle mover for their racing cars. Ferrari’s racing cars have an extremely low ground clearance of 60 mm, which places very high demands on the vehicle mover. Thanks to Famek’s extensive experience and expertise, it took only three months from receiving the purchase order to delivery. 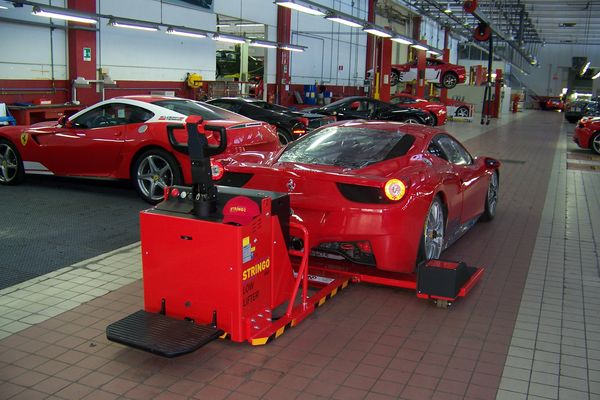 “The model we developed for Ferrari’s racing cars is probably the lowest in the world,” says Anders Bergkvist, Marketing Director at Famek AB, developer and manufacturer of Stringo Vehicle Movers. “It shows that we can also develop products for extreme handling situations. It was technically challenging, since no one had ever developed a product like this before. But we are specialized in developing movers from scratch.”

The extremely low ground clearance of 60 mm is at the rear of the car. It’s even lower in the front, so the lifting device has to go underneath the car from the back. The rear wheels are secured in recesses on the mover, which are very shallow due to the low height. The press arms that prevent the racing car from rolling forward were specially designed so they could be folded in under the car. A brake pad prevents backward rolling.

The press arms lie flat against the ground when the car’s rear wheels roll into the recesses and are secured. There is only 10 mm of space between the mover and the car’s undercarriage. Then the mover lifts the car 50 mm, shifting its 800 kg onto the rear axle.

“After receiving the order from Ferrari, it took us three months to develop and test the machine,” says Bergkvist. “We’ve developed low-clearance machines before, but not to this extreme. It’s probably the world’s lowest car mover. Ferrari has already started using it.”

The vehicle mover was delivered to Ferrari in Modena on schedule and to specification. No further adjustments have been necessary.

Famek, which makes the Stringo, has previously developed custom made products for the aerospace, automotive and other industries. It is the only company of its kind that develops and builds customized products as well as standard products from scratch.

“This machine demonstrates that we are able to develop products even for the most difficult vehicles, like racing and sports cars,” says Bergkvist. /ins

Famek AB, developer and manufacturer of Stringos, is a global leader in developing products for the efficient, safe and pollution-free moving of vehicles weighing two to five metric tons. Stringos are currently found in 35 countries on all continents. www.stringo.se